Were you to take a look at the big businesses of the 90s, you’d expect many of them to be around forever. Giant department stores and similar all fell by the wayside, though. For years, these kinds of institutions would become very hard to see being overthrown – but with the rise of the internet, everything changed. Looking back on the best part of three decades of the internet, has it really changed the world so much? A quick look at the sheer numbers that the big internet companies produce in 2018 probably tells us that yes, things are different now.

If you were to hop into a time machine and head back to the 1990s, at the earliest dawn of the internet, you’d find most people would never believe a word you say. If you were to tell them that you were about to start using a system that would help people from all across the world to communicate with one another. From all across the world, we communicate with people who we will never meet in person.

Take social media. In a single hour, Facebook along brings in more than 240m likes – that’s two hundred and forty million. Every hour, 18,000 new Facebook profiles pop up. This shows you that social media and communication in the modern age is not just changing: it’s transforming at a rate that ensures it is unstoppable.

Twitter, too, produces around 18,000 new users in a single hour. This shows you that these sites are bringing together tens of thousands of people every single hour. This is why Twitter sees not far off 20.85m tweets in a single hour. With so many people engaged and engaging with one another, it’s incredibly easy to see how the scale of internet companies stands out in the communications industry.

In the 1990s, we have our phones and we could communicate with people via landline. Today, though, we can view everything on the go and speak with people whom we have not spoken to for many years via the internet.

The scale of the modern internet communications platform dwarves anything that we ever knew until now. This is why, for the most part, being able to understand the scale of these technological behemoths is so important: they have changed everything.

What else, though, can the scale of the internet be seen in?

Let’s take that quick trip back to the good old days for a moment, and think about the way we used to consume media. In the past, we would do so by watching the TV or listening to the radio. Today? YouTube is by far and away the dominant way to take in media and entertainment at the moment.

Boasting over 208m video views in a single hour, no other platform for media can draw in the same scale and variety of views all at once. TV companies tremble in their wake, transforming and utterly re-developing the entire landscape of the media industry. Every hour, 18,000 hours of video is uploaded to YouTube. This lets you know the scale and size of this enterprise: it is far bigger than anything we have ever produced as a species before when it comes to entertainment. No other entertainment platform has ever provided us with so much in one place, with total control over what – and when – we watch everything available on their platform.

This shows you just how much YouTube – and companies like it – have transformed how we find things to do. If you want to know why the world of media feels so different, and why kids appear to be watching stuff on YouTube instead of classic TV channels, consider the accessibility angle.

Many of us don’t have the means of the need to have a TV box in every room any longer. If you want your kids to enjoy some media, the internet offers far more opportunity at the fraction of the cost of a standard TV package. For that reason, it’s easy to see why the scale of modern internet companies in 2018 is so well represented by looking at YouTube; the size is maddening.

Another part of society which has changed drastically in the few short years of the 21st century thanks to the web is that of travel. Once upon a time, if we wanted to go somewhere we had four options. We could ask a friend or family member to drive us if they had the time. We could get public transport. We could get a taxi. Or, we could walk. Now, you have option number five – private hire via apps like Uber and Lyft.

In a single hour, Uber is dealing with over 417,00 rides and Lyft around 43,000. This shows you the scale of this service. It blows any other kind of taxi firm out of the water in terms of scale for one company. Instead of being millions of small independent taxi firms competing against each other, the big players like Uber and Lyft just work across the world in as many spots as they can.

This naturally changes how we can get around. With more detail provided on tools like Uber, it’s very easy to call a taxi and get home as soon as you possibly need. Indeed, with just under 70 new drivers signing up for Uber in an hour, it’s easy to see why people care so much about using the service.

It’s becoming very popular and, like many of the transformative industry adjustments we’ve listed above, will go a long way to utterly transforming how we do things and why. If you want to see why the world is changing so much, then be sure to have a look at the latest infographic from Betipy.com.

They break down in real-time what is going on with businesses from across the world. It makes realizing the scale and change which the internet has allowed pretty damn easy!

Best Veneers have created the live web ticket “Internet in Real Time” which gives a unique look at how big these internet companies are; 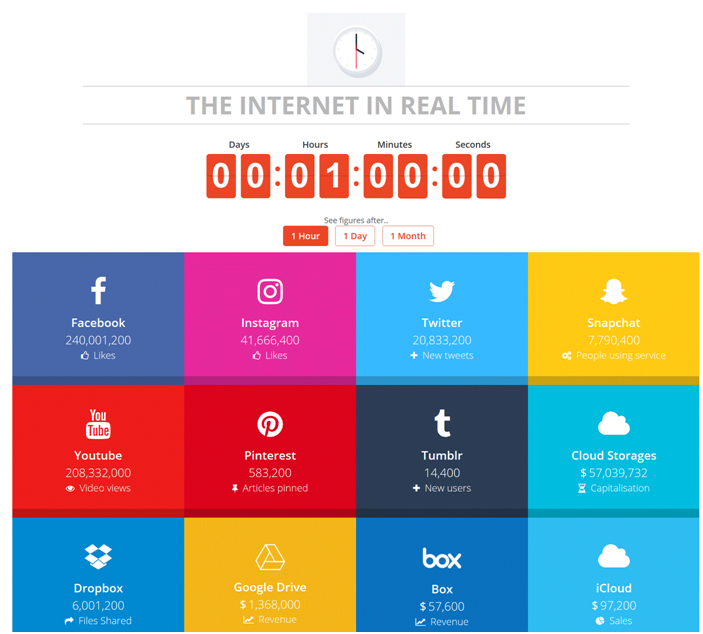