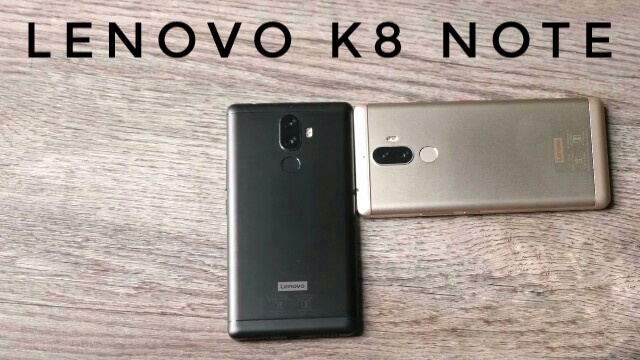 Lenovo after Achieving success by launching Lenovo k6 power now it came with an awesome device at the budget price point.The Lenovo K8 Note is the Perfect competitor of Xiaomi Redmi note 4 which is no.1 mobile in India right now at the time of writing this article, but Lenovo k8 note is a budget device considering the price to performance ratio. you can buy the Lenovo k8 note at Amazon.in starting from 17 August as two variants 3GB+32GB and 4GB+64GB storage. Lenovo k8 Note is priced at 12,999 for 3GB+32GB and 13,999 for 4GB+64GB.

The Lenovo k8 note also comes with the latest android version android nougat 7.1.1, and when it comes to camera this Lenovo k8 note camera is equipped with 13 megapixel camera on front AND 13+5 DUAL CAMERA Setup at back which can capture the photos very good and as it is a dual camera setup the depth of field and focus of the back camera going to be awesome and The rear camera has a dual-LED CCT flash along with that surprisingly the front camera also have a flash equipped with it.

Now when we talk about the connectivity the Lenovo k8 note features connectivities like Connectivity options include 4G VoLTE, dual-band (2.4GHz and 5GHz) Wi-Fi 802.11ac, Bluetooth v4.1, GPS/ A-GPS, Micro-USB, and 3.5mm audio jack and you can also extend the storage up to 128gb with the given micro sd card slot.

Lenovo k8 notes 4000 mAh battery supports rapid charging technology which makes the phone to charge very fast and you will get the 15W rapid charger in the box along with the Lenovo k8 note Lenovo says this is the first smartphone from its product to ship with a rapid charger, The battery is supposed to deliver up to 24.7 hours of talk time, and 378 hours of standby time. that’s pretty much good at this price point.

The measurements of Lenovo k8 note are 154.5×75.9×8.5mm and weighs 180 grams and it has all the major sensors like accelerometer, ambient light sensor, gyroscope, magnetometer, and proximity sensor and especially for the security purposes the Lenovo k8 note is built with a fingerprint sensor which quite fast and responsive the fingerprint sensor is placed at the back of the device.

Lenovo k8 note also have in-built Dolby atoms to enrich the music experience for music lovers and it also holds a special music key which automatically launches the music app and controls the playback for a better instance and when it comes to processor Lenovo k8 Note is equipped with the powerful ten-core MediaTek Helio-X23 processor clocked at 2.3GHz which promised to deliver awesome performance and the benchmarks crossed 90,000+ as said by the official sources which is quite good this Lenovo k8 note smartphone also ships with the google assistant pre installed and the exciting multi window mode, and it’s splash resistant and also it supports dual sim with dual standby.

Final thoughts on the Lenovo k8 note are at last Lenovo k8 note attracts the middle-class people as it was a budget flagship device and a better competitor to the xiaomi redmi note 4 finally Lenovo studied previous cases like Lenovo k4, k5, k6 note device launches and made this phone at a good price point regarding all specifications and price to performance ratio. So, in my view, I can say that it can make difference in online market of mid range phones and can give competition to the redmi note.