To remove or uninstall dropbox from Mac, there are various ways. You can uninstall the app completely from your macOS and delete its cache & files, or you can do it without deleting them. Also, you cannot sometimes remove dropbox from your device because its plugins are already in use.

So, how to get rid of Dropbox application for Mac in all these scenarios? Here I’ll walk you through 5 working methods for the same.

Let’s see how to disconnect dropbox with Mac:

How to Remove Dropbox from Mac? [5 Working Ways]

Curious about how to remove dropbox from Mac without deleting files? Uninstalling or removing dropbox from your PC or Mac doesn’t delete any files in your account. You can still view the dropbox logs from dropbox.com. However, if you still don’t want to take a chance, you can simply unlink your account from that device.

When you unlink your dropbox account on Mac or another PC, dropbox stops syncing files for that device while they are available on the web and other devices.

Steps to unlink or remove dropbox from Mac without deleting files:

Alternatively, you can cancel syncing of dropbox folders. How to unsync dropbox from Mac? Just follow these steps:

After that, delete it from your Mac by following the steps mentioned in Method 2 below.

Many people are curious to know how to remove dropbox from Mac menu bar. To do that, you have to uninstall dropbox manually by dragging it to the bin or trash to remove it.

However, if you have opened dropbox at startup or it is set to open there, you first have to quit the app and then move it to trash. To do so, follow these steps:

3. By using an Uninstaller

The other quick and simple way to remove the dropbox folder from Mac is to use a third-party installer. Some of the best-known installers for Mac are:

Here we explain the steps of how to uninstall dropbox on a Mac using CleanMyMacX. The steps will be almost the same for all these tools.

Just like a manual process, you must first quit dropbox from your Mac’s menu bar (as described in Method 2). Download CleanMyMacX for free, launch the app, and follow these steps to uninstall dropbox using it:

If dropbox is in your Mac’s contextual menu because you use the app frequently, you can directly remove it from there by following these steps:

5. When Dropbox Extension is in use

How to Clear Dropbox Application Settings on Mac?

If you have deleted dropbox from the contextual menu of Mac and want to get rid of its application settings as well, follow these steps to do so:

How to Stop Dropbox’s Launch at Startup on Mac?

If you are using multiple cloud storage on your Mac and want to access dropbox only when you need it, you can switch off/disable dropbox startup launch by following these simple steps:

What to do if you face a problem uninstalling dropbox from Mac?

Facing a problem with uninstallation and wondering how to disconnect dropbox from mac? The possible reason behind it could be the running of dropbox processes in the background.

In that scenario, you have to force quit all the processes one by one to remove the dropbox app from the mac. Here is how to do it:

How to Clean Dropbox Junk Files on Mac?

Sometimes, after uninstalling or removing dropbox from a mac, its cache or files remain leftover in your system’s memory. So if you want to free up such space, you can clean dropbox junk files on mac using any disk cleaner software or opt for the manual way.

To manually clean the junk files of dropbox on Mac, follow these steps: 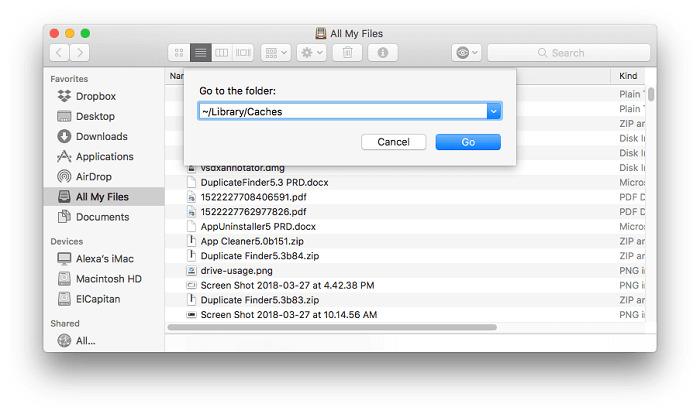 Click on any folder named Dropbox under these paths and move to trash to remove the leftover junk files to clean up space.

To log out of dropbox from dropbox.com or a mobile app, you can simply go to its “Settings” and click on the Signout option. However, to log out from the dropbox desktop app, follow these steps:

To add dropbox to the finder, first launch the finder and then follow these steps:

Dropbox is by default located under the “Users” folder on the hard drive of the Mac. But, in case you are not able to find it there, check this way:

If your computer is connected with your dropbox account and you delete any dropbox file, it gets deleted from dropbox.com and other synced devices. However, the file remains in the “deleted files” section on your account, and you can restore it within 30 or 180 days (depending upon your plan).

To prevent changes to reflect on other devices, dropbox unlink is the ideal option on Mac before uninstalling or removing it.

If you don’t want to get charged for your current account plan, you can downgrade any time to a dropbox basic account (free version) with limited features. To cancel a dropbox subscription, go to the “Billing” tab of your dropbox account and click on the “Cancel Plan” option under the Manage Plans section. Your account will be downgraded at the end of the monthly billing cycle.

We hope that now you know how to remove dropbox app and files from mac in all the possible scenarios with these various working ways. But if you don’t want changes to get synced everywhere, don’t forget to unsync dropbox from your mac before uninstalling or removing it. For any further queries related to this topic, get in touch with us in the comments.